Crocodiles are reptiles. Unlike birds and mammals, crocodiles are unable to maintain constant internal body temperature by physiological means. They are therefo referred to as ‘cold-blooded or poikilothermic animals with a backbone (vertebrates Crocodiles are extremely ancient animals. They have been around for more than million years. During their time, crocodiles had witnessed not only the evolution many new animal groups, but also the extinction of several other groups including t dinosaurs. Although ancient, crocodiles have remained largely unchanged in bad form. Crocodiles are great survivors. All crocodiles, both past and present, possess long jaws, a protective armor of scales, streamlined body, and long tail. These features have enabled them to become extremely efficient semi-aquatic predators. They can live on land and in water, and thus they are adapted to an amphibious lifestyle. Of the 13 species of crocodile found in the world today, two species occur in Sri Lanka

Freshwater crocodile, otherwise known as the Mugger or marsh or swamp crocodile. It is known as ‘hale kimbula’ (sluggish croc) in Sinhala, and ‘kulathu muthalai’ (lake croc) in Tamil. It is widely distributed across the island, in the numerous shallow man-made irrigation reservoirs or tanks, but sometimes can be encountered in brackish waters as well. Its body length rarely exceeds 3 to 4 m. It can be identified by the dorsal osteoderms which are rectangular and transversely sutured to one another; its relatively short, wide snout; and 4 postoccipital scutes. Breeds during the south-west monsoon.

The saltwater or marine or estuarine crocodile, found in tidal and freshwater rivers and swamps. It is known as ‘gatte kimbula’ (rough-skinned croc) in Sinhala, and ‘Semmuknan muthalai’ (copper colored croc) in Tamil. It can be distinguished from the freshwater croc by its ellipsoidal osteoderms that are widely separated from one another by skin. The jawline is uneven, and the teeth vary in size. The body has a brassy yellow color and the skin is marked and spotted. It lives in tidal and freshwater rivers and swamps. The 5-6 meter long saltwater crocodile is probably the world’s largest reptile and the most dangerous as well. In Sri Lanka, it has the unenviable reputation as a “man-eater”. 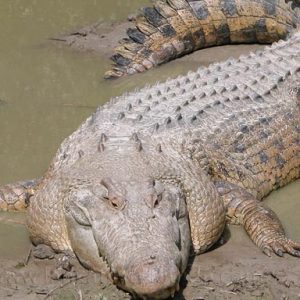 Crocodiles are lizard-like in appearance with limbs being straddled sideways from the body instead of being directly below as in mammals. The fore limbs are shorter than the hind limbs which make their body arched when moving on land. In water, their webbed hind feet and long tail make them efficient swimmers. When in water, crocs maintain a ‘minimum exposure’ posture, in which only the sensory parts such as the nostrils, eyes, ears, and the cranial platform overlying the brain, can be seen above water, while the snout and the bulk of the body remains submerged. The prey has no idea of the real size of the predator in water. All crocs have a huge head almost one-seventh the total body length. The muscles that close the jaws are extremely powerful – a croc can easily crush the skull of a wild boar or break the hand or leg of a man. But the muscles that open the jaws are weak.

As they grow from hatchling to adult, crocodiles tend to be indiscriminate feeders, eating a variety of prey ranging from crustaceans to water buffalo calves. Crocodiles hunt at night, waiting half-submerged for terrestrial prey. Much of the feeding occurs between dusk and dawn when crocs are active. They are often inactive during the middle of the day when the ambient temperatures are the highest. But being opportunistic feeders, crocodiles can switch to a prey that is diurnal if it is available. This explains why crocodiles attack human beings while they bathe in the tanks or rivers during the day. Feeding is influenced by body temperature. If the weather is cool, they will either stop feeding, or they must raise their body temperature through basking before feeding. This is to ensure that the food is digested. Digestive enzymes can function only within an optimal range of temperature. At low temperatures, food will rot before it can be digested.

Despite their large size, crocs have a relatively small stomach about the size of a rugger ball. Hence they cannot eat a large prey all at once. This is the reason why crocs stash their prey along the water’s edge and revisit it periodically to feed. The stomach is able to retain hard, undigested objects such as stones (known as gastro-liths) that aid in digestion. The fleshy tongue is immovable and although teeth are numerous, they can only help bite the prey and not chew it. The conical teeth on the jaws intermesh perfectly when they are closed. Lost teeth are constantly replaced throughout life.

Crocodiles perform well between 30° and 33°C and hence heating and cooling are important. It is to achieve this temperature range that they need to move between warm and cold areas in their habitat. Hence they are amphibious. In hot weather, they either stay in water or under shade, and in cold weather they bask in the sun to raise their body temperature. To prevent overheating, crocs will open their jaws (Mouth-gaping’ posture) to exchange heat with the environment. This way, the brain is kept cool when the rest of the body is hot. Much of their activity is done anaerobically during which lactic acid builds up in the blood, high levels of which can be fatal. Hence their periods of activity must be followed by periods of rest to repay their ‘oxygen debt’. If a croc struggles for a long time, as when it is captured, it could die.

When on land, crocodiles breathe through the mouth, and when in water, they use their nostrils, which are closed by flaps when they submerge. The palatal valve at the back of the throat can be opened or closed – a great advantage when dealing with prey underwater. The valve prevents water going down the throat. Crocodiles have an excellent sense of smell since they can identify odors along ‘nasal’ canals. Crocs are the only reptiles having a completely divided ventricle and therefore a 4-chambered heart, like birds and mammals.

Crocodiles being powerful aquatic predators have binocular vision through overlap of the fields of vision from left and right eyes. This helps orient precisely potential prey. This is due mainly to the fact that the eyes are placed very close together. They eyes are only 7 cm apart on a croc that is 5 m long. In addition to the upper and lower eyelids, a croc has a third, transparent and protective eyelid that moves sideways across the eye when it submerges. The pupils open and close depending on the intensity of sunlight. In bright light, they close to a vertical slit and in darkness, they remain fully opened. Besides, at the back of the eyeball is the retinal tapetum composed of a thin layer of guanine crystals which is able to reflect back any light that passes through the retina. This enhances the vision, especially in low light intensities. When a torch is shone on the eyes, a red reflection will result.

All trots are polygynous – single males mate with several females. Mating always takes place in water and is preceded by an elaborate courtship. Unlike lizards and snakes, crocks have a single penis, and fertilization is internal. It takes about 4-6 weeks between mating and egg laying. When laying eggs, the female goes into a trance and will not bite anyone disturbing her. Once egg laying is over, become very aggressive and protective. The eggs are not moved by the female during incubation. Freshwater crocs are “hole nesters”; they like the turtles, excavate a hole In sand and bury their eggs, Saltwater crocs ate “mound nesters”; they construct a mound, usually out of vegetation, and deposit their eggs In the middle, furthermore, freshwater crocs are said to be “pulse nesters” where all females within a population nest within a few weeks, Saltwater crocs are “prolonged nesters” with the nesting season lasting 6 months. In crocodiles, it is the incubation temperature that determines the sex. At 30°C or less, the development is slow (takes about 2-3 months) and eggs develop exclusively into females, while between 32°C and 33°C, mostly males are produced. An incubation temperature of 31°C gives both sexes. At the time of hatching, the young would call from within their eggs. They will use their ‘egg tooth’ to break open the egg shell and emerge. The female too may excavate the nest and carry the young to the water in its mouth.

Although crocodiles do lay many eggs, only a few hatching survive to adulthood. This is the crux of crocodile conservation, most crocodile eggs laid do not survive to produce hatchlings because of infertility, flooding, overheating, predation, inadequate gas exchange, or desiccation. In a cohort of 1000 eggs, only 8 crocs will reach 5 years of age. Thus every adult crocodile in the wild has survived against the odds. Crocodiles, in particular the saltwater crocs, are extremely dangerous animals that can attack and kill human beings. Thus, awareness of the fact that crocs can be dangerous is an important aspect of crocodile conversation. Relocating saltwater crocs is very dangerous, given that they are highly mobile; they often try and return to where they came from. But crocodile attacks are not very common in Sri Lanka. More people are killed by snakes. Yet, every time a croc attacks a human being, it is given wide publicity and people’s attitude changes from tolerance to intolerance. “Fear” of crocodiles exists mostly in city dwellers; people living in remote areas usually tolerate crocodiles in their neighborhood. Nevertheless, every effort must be taken to improve public safety and minimize crocodile attacks. The only real way of conserving crocodiles without increasing conflict with people is through public education programs. If a captive breeding program is developed, it’d possible to restock areas from where crocs have either disappeared or declined in number. To be successful, crocodile conservation program must be designed as if people matter.

Our goal is to provide detailed and precise travel information to anyone who seeks to travel in this paradise island. We guarantee the integrity of the information.

Thoughtful thoughts to your inbox